Part 1: Myelination of a neuron

Oligodendrites are responsible for creating a sheath/cover of myelin that acts as an insulator, on the axons. This sheath makes the transfer of an electrical impulse, otherwise known as a synapse, quicker along the length of the neuron. Regions dominated by myelinated axons constitute the white matter of the CNS. In contrast, regions dominated by neuron cell bodies, dendrites, and unmyelinated axons are called gray matter because of their dusky gray color.

Part 2: What is a synapse? A short overview of synaptic activity

One nerve cell communicates with another nerve cell or the target body with the help of a synapse. This communication takes place at either end of neurons called the synaptic terminals. When a neuron receives a nerve impulse it is passed along the length of the axon or it ‘jumps’ over the myelinated regions of the axons towards the tip of the axon reaching the terminal boutons where it is transferred to another neuron or the target.
These synapses are generally of two types: chemical and electrical. In chemical synapses, the transmission of nerve impulses is achieved with certain chemicals called the neurotransmitters. These neurotransmitters open the voltage-gated calcium channels in the cellular membrane of the neurons which releases certain molecules from the presynaptic neurons that cross this channel to the post-synaptic neuron and bind to receptors located in the postsynaptic cell membrane and initiate a change in the neuron that can be inhibitory or excitatory in nature. In electrical synapses, the transmission if the nerve impulse is achieved by special channels in the neuronal membrane called gap junctions which have the ability to pass electric current from one cell to another causing a voltage change in the receiver cell.
Chemical synapses are often complex and nerve impulse propagation takes time. Whereas, electrical synapses offer a rapid transfer from one cell to another. 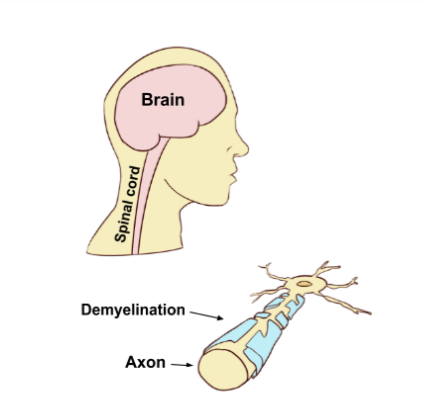 It arises when the myelin cover on the axon gets damaged and/or destroyed. This leads to a significant loss in neural transmission of signals and eventually leads to a loss in neuronal function thereby affecting the bodily functions. Chronic, prolonged exposure to heavy metals such as arsenic, lead, and mercury leads to damage of neuroglia and to demyelination as a result of heavy metal poisoning. As demyelination occurs, the affected neurons deteriorate and the condition becomes irreversible. Diphtheria is a bacterial infection that affects the respiratory system and occasionally the skin. This bacterium often releases diphtheria toxins that damage the neurons and destroys the myelin sheath. This demyelination leads to sensory and motor problems that ultimately cause fatal paralysis. Degenerative disorders such as multiple sclerosis also damage the myelin sheath covering the axon. This also affects the optic nerve, brain, and spinal cord. In about one-third of all cases, the disorder is progressive, and each incident leaves a greater degree of functional impairment. The average age at the first attack is 30–40 years; the incidence among women is 1.5 times that among men. In some patients, corticosteroid or interferon injections have slowed the progression of the disease.

A neuron has a very limited ability to recover after an injury. If the oxygen or nutrient supply is restricted, as in a stroke, or mechanical pressure is applied to the neuron, as often happens in the spinal cord or peripheral nerve injuries, the neuron may be unable to recover unless circulation is restored or the pressure removed within a period of minutes to hours. If these stresses continue, the affected neurons get permanently damaged or killed. If the neuron regains normal function, it will gradually return to a normal appearance. Neural regeneration inside the CNS is more complicated as many more axons are likely involved due to their high interconnection, astrocytes produce scar tissue while the healing process and this may block growth across the damaged area, and these astrocytes also secrete chemicals that inhibit axonal regrowth thereby affecting neuronal repair and regrowth.

Neurons and Neuroglia: Cells of CNS